I’m back with another writing challenge to get us through the rest of the summer! I’ve been off the map so to speak these last few months, lots going on in my life. I’m trying to navigate this new normal, some days are better than others, some days I am more productive, and some days I’d rather not relive. I have much to learn still in this life and there is no other place to learn, than from the Word of my God, not the lies that the world shouts constantly!

This month we will be in the book of 1 Peter. Peter, also known as Simon Peter, was one of the first disciples Jesus called. Peter and his brother Andrew were fishing as Jesus called to them, “Come, follow me and I will make you fishers of men.” (Matthew 4:18-19) They immediately left their nets and followed him. As I started to read more and find out why they were so willing to just go with Jesus, I quickly found out why over in the book of Luke chapter 5 verses 1-11.

One day Jesus was by the Sea of Galilee sharing the Word of God to the crowd around him. There was a boat of Peter’s there and Jesus got in and asked him to put out a little from shore so he could teach from the boat. After Jesus finished speaking, he said to Peter, “Put out into deep water, and let down the nets for a catch.” But Peter answered saying that they had worked hard all night and hadn’t caught anything, but because you say so I will let down the nets. After he obeyed the Lord, they caught such a large number of fish that the nets began to break! They had to call over another boat to help get all of the fish into the two now sinking boats.

Peter then fell at Jesus’ knees and said, “Go away from me Lord; I am a sinful man!” He and his friends were astonished at the catch of fish! Jesus then said to Peter, “Don’t be afraid; from now on you will catch men.” So they pulled their boats up on shore, left everything and followed him. What faith they had! That’s the type of faith I want to have. 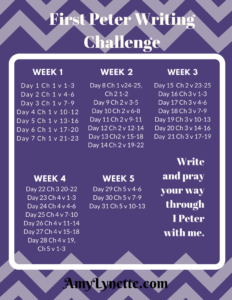 In the darkest hour of Christ’s life as he struggled in Gethsemane about his coming task, Peter fell asleep. At one point Jesus came upon His dozing disciples and asked, ” Why are you sleeping?…Get up and pray so that you will not fall into temptation” ( Luke 22:46) The consequences of Peter’s prayerlessness were both immediate and tragic. In the ensuing hours, as all the forces of hell were unleashed, the disciple ironically nicknamed “the Rock” discovered that good intentions are not enough to withstand great temptation.-Stormie Omartian

Don’t become a person of prayerlessness. Be joyful in hope, patient in affliction, faithful in prayer. Romans 12:12

Hi guys, I'm Amy. I am the wife of Tom for sixteen years, mother of four here with us and one waiting in heaven, full time homeschooler, and lover of Jesus! I enjoy a good bible study, cooking and baking with my family, painting, and anything crafty. Let us hold unswervingly to the hope we profess, for he who promised is faithful. Hebrews 10:23